Oh MTV how much do you make me feel old? I was my son’s age when MTV first aired and that feels like only a few years, not decades ago. I actually like being in my forties, these are my best years yet, but not when you are surrounded by two THOUSAND girls in hot pants, and stilettos that are half your age. This is when being 40 gets you nowhere but the nosebleed seats. I get it I’m not MTV’s target audience, and that’s fine with me because as much as I would like to fill the seat next to Rob Pattinson, I would rather be in the pit whipping my hair back and forth to a good guitar lick from the Foo Fighters. That was the only reason I was there anyway.

With a little luck and my best sad panda story about how I haven’t been to any local Foo shows I managed to score 2 slots as “casted audience” member for the 2011 MTV Movie Awards. I had no idea what to expect but I have always wanted to attend an award show, definitely bucket list material right? So I tore up my closet all weekend because I was instructed through Gotham Casting that we needed to be frontin some club thumpin attire. Um, ok. I don’t go to clubs soooooo now what. I found shoes I knew I could hike in and I scrounged up a sequined dress, ok it was more like a top but it covered um everything. I found a pair of lycra leggings with zippers at the bottom that gave me just enough confidence to march right into that viper pit. I’m kidding they were harmless.

When you go to these award shows here’s how they go down. The casting company

(Gotham Casting) contacts about 2000 people roughly expecting about 1000 to show. You line up hours before the show, call time Sunday was 2pm, then you wait and wait and wait and then wait some more. They started taking a few groups to another holding area and when it appeared that our chances weren’t looking good we started asking questions telling people “hey we are with the band” … kinda.  We stood there and listened to people pleading with security and show organizers to get in. The crowd of people left behind got louder as the clock ran down it was obvious there were a lot more people then seats this event. Around 5 o’clock we went through the metal detectors and bag check and yes you can bring a phone you just can’t snap photos in your seats, in someones (preferable Rob Pattinson’s) face.

We were led through the very unglamorous and not-so-red carpet route to the Gibson Theater. The highlight was walking past THE Bumblebee from Transformers. You know I took a picture. When we got to the venue we were walked straight to the balcony and then told to move back even higher after we took the front row. So much for riding the balcony rail. It was fine and we took our seats and groaned how good it felt to sit. Pass the popcorn. We were free to come and go at this point so we headed back down and watched all the stars walk the red carpet, some of them (a band I won’t mention) made a wrong turn and wound up face to face with us at the concession stand buying beer. HA! I would have so bought them a warm up beer they shouldn’t have left so quickly.

We walked around trying to get a good glimpse of a few people, I saw Ryan Reynolds, man is he handsome. And Mr. Fergie? Josh Duhamel? (fanning myself) he’s quite lovely. And then there is Taylor, I want his skin, that sounds odd, let’s try that again. I long to have his milky smooth complexion. I don’t know if that was even better but juts look for yourself.

and there’s me. I’m not sure about my outfit choices in retrospect. I do know that my arms haven’t seen a dumbbell in a year (there I said it). I’m a gym drop out. 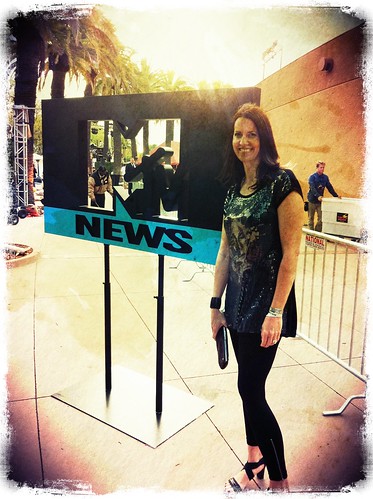 Yo MTV Raps! who remembers that!?

The photos from our seats looks like the Hubble telescope took them so I’ll spare sharing the entire roll. The Foo Fighters were early in the show and they sounded GREAT … they played Walk, from their newly released album Wasting Light.

I think this photo of Jason Sudekis pretty much summed how bad our seats were. He was pointing to us up in the balcony, we were the punchline about Arnold filling up the balcony with all his secret kids, yeah the audience grumbled too.

Jason was really funny aside from the Ahhhnold jokes. He is one of my all time favorites on SNL

So after a few awards, I saw Rob get his Best Actor and Justin cop a feel with Mila, that

was enough for us and we dodged the rain grabbed a couple spicy tuna rolls and hopped back into our carriage before it turned back to a pumpkin at midnight. I always know that these mini adventures are so good for your soul. They force me to break out of the comfort of sweats and my big leather sofa. I ALWAYS meet the most interesting people, this time it was a delusional Brittany Spears impersonator and the darling pageant beauty from Maine. Never short of surprises and fun I will forever continue to seek out these little time outs from my predictable domestic routine. If not for anything but good blog fodder right?

Rock on modchik readers. Until the next adventure keep fighting the good fight.

What began as a blog about an unexpected pregnancy at midlife morphed into a (sometimes) steady stream of private thoughts made public. I've moved from blogs to photography and now astrology. ... more about the journey here.